Deep-Sky astrophotography deals with the photography of stellar bodies outside of the solar system such as galaxies, planetary nebulae, open star clusters and globular clusters. Getting into deep-sky astrophotography doesn't have to be expensive if you know how to use your existing camera gear. With the proper technique an entry level DSLR or Super-zoom camera might just be enough to capture even faint galaxies. The images won't be as good as ones taken with dedicated astrophotography gear but nevertheless its impressive to see what is possible with digital post-processing today.

The challenge of astrophotography lies in the faintness of the observed objects and their slow and steady motion across the night sky. Good images require long exposure times which in turn require specialized tracking mounts to compensate for the motion of the stars due to the earths rotation around its axis. Any tracking mount has to be aligned with the northern star which requires a bit of experience. The cost of an entry level tracking mount and a polar scope together is approximately around 500 Dollar. I would strongly encourage you to get one, but if you are just starting with astrophotography or want to travel with light gear this article may give you an alternative.

How does a tracking mount work?

A tracking mount is a device which counters Earths rotation. It is revolving around its own axis once every 24 hours. The motion is pretty similar to the hour hand of a mechanical clock. Therefore the first tracking mounts were based on modified clockworks but instead of the hour hand a rotary disc with a camera attachment point was rotated.

Even with a properly aligned tracking mount exposure times will be limited to a couple of minutes without additional hardware. Such hardware comes in the form of so called auto guiding units. An auto guiding unit is a computer controlled image acquisition system usually mounted on a smaller scope at the side of the main scope that is tracking additional stars in a wide angle image. This information is then used to correct the tracking of the main scope. As you can see astrophotography can become very complex very fast. But this should not prevent you from making the first step towards your own deep-sky images.

How does fixed tripod astrophotography work?

Without tracking long exposure times will cause star trails.

Without tracking, long exposure times will cause star trails to appear in an astronomical image. The star trails are shaped like tiny circle segments centered around the northern star. An exposure time of 24 h would theoretically result in full circles but this is not possible due to the night/day cycle on Earth. Star trail photography is another popular branch of astrophotography but shall not be investigated in detail here.

The name untracked- or fixed tripod astrophotography refers to the lack of a tracking mount. The term "untracked" is a bit misleading as it refers to the lack of mechanical tracking. Fixed Tripod Astrophotography is using a computer to overlay a series of shortly exposed light-frames properly. The tracking takes place in a software as part of the post-processing toolchain.

Usually this is too short for capturing enough light for deep-sky astrophotography but for untracked astrophotography it is the best one can get for a single light frame. In order to get the long exposure times required for imaging deep-sky objects many of those short exposure light frames are combined into a single image. The process of combining the single frames is called stacking. This process is performed by computer programs that are computing the positional difference of the light frames and are then merging them into a single image.

One problem when taking a long series of images from a fixed tripod is that the object will inevitably wander out of the field of view of the camera. If this happens the camera needs to be readjusted before proceeding. This readjustment could also be seen as a kind of tracking. As opposed to real tracking with a tracking mount this tracking does not happen continuously but in intervals. When using a 200 mm lens 50-100 images can be taken before readjusting the camera. When using shorter focal lengths the number of images is larger.

Light frames obtained by using 2-3 seconds of exposure time are usually severely underexposed, sometimes they appear completely black (apart from a few faint stars). Underexposed images pose a problem for digital image processing. To understand this one has to consider that digital image formats store brightness data with a distinct number of discrete brightness levels. The number of levels depends on the number of bits used for storing the data.

If an image is underexposed the brightest pixel in the image is darker that the highest possible value. If the brightest pixel in an underexposed 8 bit image has the value 64 only 6 of the 8 available bits are used for storing the image data. The total number of different brightness levels is then only 64 instead of 256. Such a low number of different brightness levels is insufficient for displaying the faint details of galaxies or planetary nebulae. Underexposure can be prevented by setting the ISO value appropriately. This setting will cause the camera to amplify the image signal and thus prevent underexposure.

A single lightframe of the Andromeda galaxy taken at ISO 12800 (2 s exposure time). The galaxy is barely visible due to excessive noise.

It is important to understand that the ISO setting will also amplify the image noise. No gain in information is achieved! The only effect is that the image information can be stored with fewer loss due to digitization. The ISO value should be chosen in a way that the relevant parts of the image are exposed properly. This may also mean that some stars may be overexposed. For untracked astrophotography one should not be afraid of using high ISO values even if this means getting noisier images.

When doing astrophotography with a tracking mount the recommended ISO value to get the best images is between 100 and 1600 (depending on the camera model). The value depends on the camera sensor and marks the optimal ISO value for the best overall signal to noise ratio. Consequently the recommendation is to use this value for astrophotography. This rule does not apply to untracked Astrophotography! The expected loss due to digitizing an underexposed image far outweights the benefit from using the sensor at the ideal signal to noise ratio. If a tracking mount is used, underexposure can be avoided by increasing the exposure time. When doing untracked astrophotography this is not an option.

How to use Typescript for creating Stellarium scripts that are easier to develop and maintain.

How to automate the process of creating videos of the night sky with Stellarium. 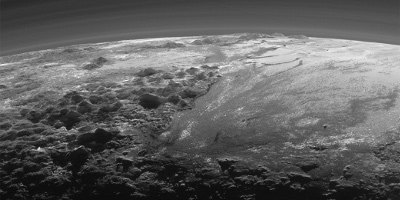 This is a collection of images obtained by NASA or ESA space exploration missions.